XSEED Games, the independent-minded publishing brand of Marvelous USA, Inc., today announced that Kandagawa Jet Girls, the adrenaline-fueled jet racing game from the creators of SENRAN KAGURA, will launch on August 25 for PlayStation®4 computer entertainment system and Windows PC exclusively via Steam. The title is currently available for retail pre-purchase through the XSEED Games Store and participating retailers as a day one “Racing Hearts” limited edition for $59.99, and will be available digitally as a standalone purchase on the PlayStation®Store and Steam for Windows PC for $49.99 at launch. A digital deluxe version will also be available on the PlayStation Store and Steam for $59.99.
The water is cool, the jet machines are warmed up, and the crowd is ready to go wild! Seven teams vie to become racing queens of the waterways of Tokyo, dazzling the crowds along the way with aerial stunts, precision shooting, and photo-finishes. Each team has their own backstories and motivations for racing, some for fame, some for honor, but all to win the coveted Kandagawa Cup.
Adding to the fray against these seven teams, Kandagawa Jet Girls will launch with some of the stunning shinobi from SENRAN KAGURA, who bring their experience with water guns and ninja training to the races. Sisters Ryōbi and Ryōna, representing the Hebijo Clandestine Girls’ Academy, are included in the core roster of characters when the title releases in North America as a special gift to fans. Separately, Asuka and Yumi, leaders of the Gessen Girls’ Academy and Hanzō National Academy respectively, will join the lineup of characters as premium DLC after the title launches. Other DLC teams from the SENRAN KAGURA series include Ikaruga and Yomi, Homura and Hikage, and Murasaki and Mirai. The four teams will be sold separately and as a SENRAN KAGURA Character Pass for $29.99.
The retail “Racing Hearts” edition will include the base game, two-disc soundtrack CD with 54 tracks, and a 5.5” x 7.3” softcover 64pg art book, all housed in a special box with exclusive art designed by Hanaharu Naruko. Find out more about Kandagawa Jet Girls and the “Racing Hearts” edition at its newly launched website: www.kandagawajetgirls.com. 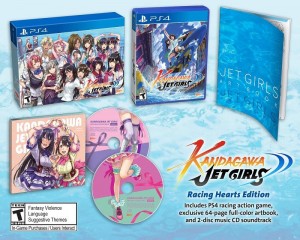 The digital deluxe edition on PlayStation Store includes the base game, the full soundtrack with 54 tracks, a set of 14 avatars consisting of all the racers, and an exclusive theme. The digital deluxe edition on Steam includes the base game, the full soundtrack, and the Maid Bikini (Lemon Yellow) and Bunny Costume (Carrot Orange) character outfits. The Maid Bikini and Bunny Costume will also be sold separately for $2.99 each.
About Kandagawa Jet Girls
Jet racing is the sport of the future and the waterways of Tokyo host some of the most daring and skilled young athletes on their high-speed jet machines. Drivers, also known as ‘Jetters,’ pair up with a ‘Shooter’ armed with water weapons to blast away the competition. They must wow spectators if they want to win, building up their boost meter with spectacular aerial stunts while dodging obstacles and evading enemy attacks. Each team can be customized with various outfits, and players can get under the hood to tweak their jet machines’ parts to improve its capabilities and tweak its handling.
Pick from the seven two-girl teams, discovering each of their hopes and motivations for racing as you play through 64 episodes of lighthearted racing drama in single-player stories. Players can switch up the roles of Jetters and Shooters on each team throughout the story mode, and can pair up any two characters from any team to create their own dream team in free mode. The title features online multiplayer with support for up to four players.
Developed by Honey∞Parade Games and to be published for the PS4™ system in North America and globally on Windows PC exclusively via Steam by XSEED Games, Kandagawa Jet Girls will be released on August 25, 2020. The title is available for pre-purchase with a physical “Racing Hearts” limited edition for the PS4™ system with a MSRP of $59.99 at the XSEED Games Store and participating retailers. The standalone game will be available digitally on the PlayStation®Store and Steam for $49.99, while the digital deluxe will be available for $59.99. This title has been rated “T for Teen” by the ESRB. The PC version is not rated by the ESRB.
More information about the game can be found at the newly launched product website. Fans can follow XSEED Games on Facebook, Twitter, Instagram, Twitch, get in depth info from their localization blog, and join the discussion on their Discord server at: http://discord.gg/XSEEDGames.