The Fruit of Grisaia (Grisaia no Kajitsu) is the first visual novel in a trilogy series by Japanese developer Front Wing. After raising over $400K on Kickstarter, Sekai Project has teamed up with developer Front Wing to bring the visual novel trilogy to North America. Following on success of the manga and anime adaptation, the Grisaia trilogy consists of The Fruit, The Labyrinth and The Eden of Grisaia. The first entry was originally released in Japan on PC in 2011 before being ported over to the PSP and Vita. Fans of the series can rejoice as the visual novel is finally making its way over to North America on Steam.

You are Yuuji Kazami, a student who transfers to Mihama Academy upon request for a “normal” life. The school in question has a total of five students each with their own unique circumstances that have led them there. Having lost both his parents and sister at a young age, Yuuji is guarded and distant at first but slowly warms up to his female classmates: Yumiko, Amane, Michiru, Makina and Sachi. All is not well at the academy as each of the girls have their own dark pasts and it is up to Yuuji to help them move on and to build a better future for everyone. The school principal, Chizuru leaves the students much of the time to their own antics and shenanigans that lends itself to very serious and comical situations. There are a fair number of decisions as the visual novel holds both good and bad endings for each classmate depending on the choices made. Although there is a good ending for each female classmate, it should be noted that there is no true ending or harem route for those who are on the fence about this visual novel. The focus on the game is unravelling the mysteries behind your female classmates and piecing it together as the story progresses over time. 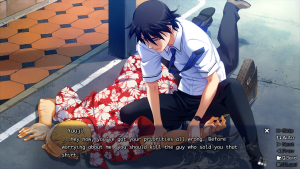 The story begins slow and picks up considerably in the last half of the game. Yuuji is mostly unfazed by the struggles his classmates are facing as he holds a very calm but cold demeanor. While it’s nice to see that a character need not be overly emotional, I couldn’t help but feel a little detached from the storyline as a whole. In addition, the flashback sequences for the girls are quite lengthy and tend to overstay their welcome when you are waiting to return to the modern day timeline. Much of the facts and details surrounding his classmate’s past is often shrouded and requires detours and other events to piece the story together. After you’ve completed the game once, there is a lot of overlap with different choices made at decision points to embark on a different route for another classmate. Make no mistake, this visual novel will not spoon feed you the information as there is a lot of mystery, thrills and suspense behind each of the girls. The game strikes a solid balance in offering you enough choices but not so many that it would feel overwhelming as you pursue the other good endings.

Visually, the character designs are polished and interactive and even though the same expressions reappear frequently, the game manages to keep your attention after many hours of dialogue. Background art and environments are stunning and the special effects are a touch in the large group settings with all of the girls present. Voice acting is top notch and the music is above average for a visual novel but gets a little repetitive towards the end of the story or respective route. A lot of effort and detail is visible in the Gallery with the CGs unlocked after a moderate play session of the game. One minor grievance I have is that only one event in the entire scene replay option for Amane was viewable as selecting the other choices would lead to a frozen black screen. Hopefully the developers address this in the final version prior to the public release. 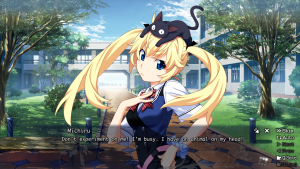 The Fruit of Grisaia is a visual story with an engaging plot and an intricate cast of characters. The story manages to keep your attention and paves the way for the sequel as there are more questions than answers by the time the visual novel ends. Character art and background environments are exceptional for a visual novel as the length extends to roughly 30-40 hours in total. I thoroughly enjoyed this visual novel as I eagerly await the sequel on Steam in the near future. Fans of the Grisaia trilogy should pick up this title as soon as possible. 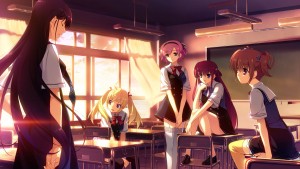 This review is based on a digital copy of The Fruit of Grisaia on Steam.