The Narcissu series is a visual novel series that was very successful in Japan that has only recently reached a Western audience through the release of Narcissu 1st and 2nd on Steam. Developed by stage-nana, another project to grace the visual novel community by Narcissu writer and designer, Tomo Kataoka is Ame no Marginal. Although it is much shorter in length than the Narcissu titles, Ame no Marginal is a visual novel that showcases more of the creator’s creative vision and gift in crafting intricate characters and compelling stories.

You are a young man who works a typical job and lives an ordinary life but deep down, you are emotionally distraught. Faced with internal turmoil and despair, you ponder the meaning of your life and daily routine as you step into the office elevator on your way to work.  As you discover the 8th floor that was never there before, you are transported to a strange world with endless rain. There is not a single person to be found nor any physical buildings or objects as time has completely stopped. Trying to make sense of your predicament, you meet a friendly and carefree girl named Rin who warns you to leave this world of isolation before it is too late. Questions arise as you wonder who the girl is, how the mysterious world came to be and why she is alone in this place. 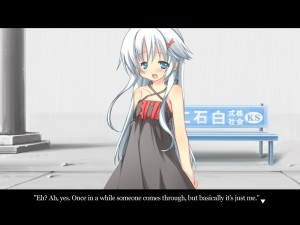 The story unfolds as you switch between two perspectives: the young man and Rin throughout the game that unlocks more chapters as you progress through the game. Both of their stories eventually intertwine with one another as you learn more about their life experiences, personality and history. Much of the gentleman’s story consists of his thoughts in trying to understand the mysterious world around him whereas the story of Rin tends to be more personal and engaging. The dialogue delves into many topics ranging from religion, faith, friendship, forgiveness and repentance. Not all of the questions raised by the plot are answered by the end as the purpose of many conversations is to draw in the reader and to analyze relevant issues to everyday life. There is no romance as the relationship between the man and Rin is platonic with the two sharing a bond and building a friendship of camaraderie. Both Rin and the young man struggle as they question the meaning of their lives with their only solace to be found in each other’s company. Much like Narcissu, it is a thought provoking story that causes the reader to evaluate and reflect on all the things deemed to be important in our lives in the real world. 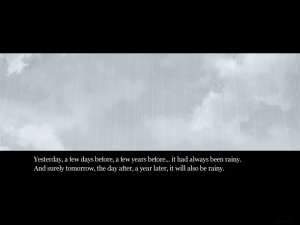 Visually, the art style is interesting but leaves the reader wanting more as the character designs and poses for Rin are fairly limited. As for the young man, we rarely see his face or figure at all in light of the special effects and animations that bring the world to life with the endless rain and white stone structures and objects. Though the two are stuck in a mysterious world, the art at times often feel dull, empty and void of any emotional appeal or personal connection to the characters. The use of more colour and a variety of animations certainly would have helped to bring the world more to life in many of the game’s chapters between Rin and the young man. Musically, the soundtrack hit all the right notes with melancholic and beautiful themes that serves as the perfect depiction of a lost and beautiful world filled with hope, despair and anxiety.

Ame No Marginal is a touching and heart-stirring visual novel as the story and characters will stay with you even after the game is completed and the credits have rolled. Narcissu fans will feel right at home with the welcome addition of the bonus Narcissu episode that unlocks once the game is completed. This visual novel may be shorter than expected but it accomplishes its purpose with its moving story that reflects the emotional creativity and gifted storytelling of its creator, Tomo Kataoka. Thanks to the localization efforts of Sekai Project, visual novel fans looking for a short but captivating story that they can empathize and relate to on a personal level will find exactly that and more in Ame no Marginal. 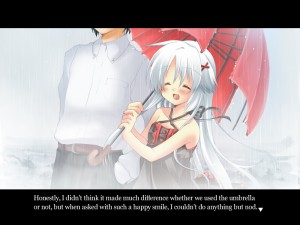 This review is based on a purchased copy of Ame no Marginal on Steam.