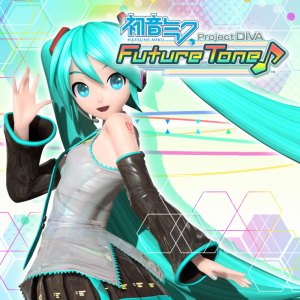 Hatsune Miku: Project DIVA Future Tone is the highly anticipated rhythm game published by Sega on the PlayStation 4. As the latest entry in the Project DIVA series, Future Tone is a PSN exclusive with the Future Sound and Colorful Tone song collections available as separate purchases or as a packaged bundle. Based off the popular arcade title Project DIVA Arcade Future Tone in Japan, the game boasts an overwhelming song selection, variety of customization options and incredible visuals for its long awaited PlayStation 4 debut.

Future Tone is similar to that of Project Diva X in its style and gameplay mechanics. The exception this time around is the focus on the generous amounts of songs that replaces the story, concert mode and the Diva room. This is a very welcome change as the time I invested in those extra features was limited in my playthrough of Project Diva X on the PlayStation Vita. Needless to say that some fans will be disappointed by this omission as you can no longer spend quality time with your favourite Vocaloid in their residence. In stark contrast to Project Diva X, the song selection is not only generous but there is something for everyone as Vocaloid fans will rejoice at the variety of songs with a fancy music video for each and every performance. Future Tone is a big game so fans are advised to set aside a large amount of space on their hard drive for the game. The base game alone carried a file size of 12.2 GB that does not include the full game or even the song packages in their entirety. 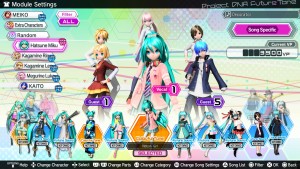 Fans may be surprised to learn that the base game, Prelude comes with two free songs with the overall cost attributed to the song collections: Future Sound and Colorful Tone. As an added incentive, fans who purchase both will receive the new Hairstyle Customization feature and Survival Mode. The only caveat is that certain modules do not support the Hairstyle Customization and hairstyles cannot be changed or swapped between the Vocaloid characters. Fans may recognize the Future Sound playlist is taken from the Project DIVA F series and from the other unlocalized Project DIVA titles for the PlayStation PSP. Conversely, Colorful Tone includes songs from Project Mirai DX for the Nintendo 3DS and the Japanese Project DIVA Arcade. Each song shows in a tiny panel on the menu the starring Vocaloid and the number of performers. Whereas in select songs a certain Vocaloid performs solo, other songs may include your favorite Vocaloids singing a duet or performing as a group. Future Tone has no shortage of content with respect to song selection for fans that missed out on Project Diva F and Project Diva F 2nd, both of which were well received and sold out at many retail outlets at launch.

The tutorial mode is available to ease players and those new to the series to the simple game mechanics. Gone are the “flick” notes from Project Diva X as they have been dutifully replaced with directional slide and multi-button hold notes. Aside from that addition, there are five levels of difficulty: Easy, Normal, Hard, Extreme and Extra Extreme. Yes, you read that correctly as Extra Extreme is the intense difficulty for hardcore fans to test their wits, skills and reflexes. Series veterans who found the previous instalments to be a cakewalk can now rise to the challenge of completing songs on Extra Extreme difficulty for bragging rights. 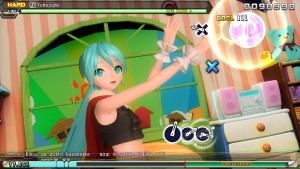 Outfits and accessories are plentiful in this game with a considerable investment of time needed to unlock them all for each Vocaloid. This presents a minor but intriguing grievance as the option to organize your closet of fancy outfits is limited to continuously scrolling of the left and right directional buttons. A lot of time spent on finding your favorites coupled with visual memorization helps alleviate the organizational problem ever so slightly. The Diva room from previous instalments would have aided in the categorization of the costumes and accessories for Miku, Luka, Rin and Len, Kaito and Meiko. The total number of accessories and outfits outnumbers the song selection easily leaving you with the fun task of deciding what you want to wear among hundreds of choices. 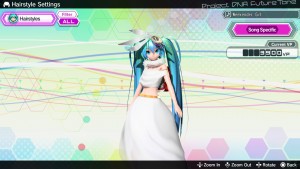 Visually, Future Tone is an exceptionally beautiful game. Project Diva F, Diva F 2nd and Project Diva X were impressive games but the graphics and animation for Future Tone are simply stellar. The polished visuals are reminiscent of the visual fidelity seen on stage at the Miku concert in Canada during the Hatsune Miku 2016 North American Tour. The colors, character models and special effects are breathtaking and coupled with the vast song selection makes Future Tone a spectacular experience for many Vocaloid fans in the West.

Future Tone is the most stunning and spectacular Project DIVA game in the series to date. Though the lack of a physical release may disappoint some fans, the vast number of songs, modules, accessories as well as the new Survival mode makes Future Tone an incredibly rewarding and bountiful game. For all the variety and content available, Vocaloid fans should not hesitate to buy this gem on launch day. As many fans proudly proclaim “Miku is love. Miku is life.”, Future Tone is the epiphany of that statement and much more. 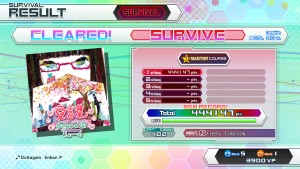 Hatsune Miku: Project Diva Future Tone is an exciting new addition to the popular Vocaloid themed rhythm game series Hatsune Miku: Project Diva.  With two song packages that together provide the player with a selection of over two hundred great songs their is sure to be something for every Vocaloid fan. The Future Sound package is packed full of over a hundred great songs from past localized and unlocalized  PlayStation system titles in the series while the Colorful Tone package includes over a hundred songs from the popular Nintendo 3DS and Arcade Project Diva titles. The base game and both song packages are available digitally only for the PlayStation 4, the  song packages can be purchased separately or bundled together for a small discount. Unfortunately, there are no plans for any physical copies for the localized versions of the game. The base game is free and includes only two songs, it is necessary to download the base game to play the song package content.

The game features all of the modules that were included in the previous Project Diva titles and for those who purchase both packages their is also a new feature that allows you to edit the vocaloid’s hair separately from the outfit. Their is also the addition of new “Survival Courses” for those who enjoy a good challenge, the new survival courses have you going through one song after another. The game has far more customization and gameplay options than any of the previous titles in the series. The graphics are noticeably higher quality than the graphics in Project Diva f 2nd and Project Diva X.  Despite the very disappointing news of their being no physical copies outside of Japan there is plenty to be excited about from the large assortment of songs to the amazing graphics. I highly recommend the game to fans of the previous Project Diva titles and to those who are new to the series since this is the most complete Project Diva experience you can get. 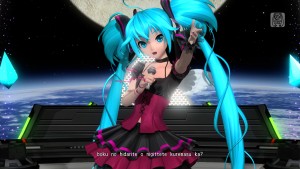 This review is based on a digital copy of Hatsune Miku: Project DIVA Future Tone on the PlayStation 4 provided by SEGA.