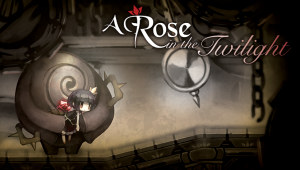 NIS America has been prominent as of late in their narrative storytelling of young girls in dangerous predicaments with their most recent titles: htoL#NiQ: The Firefly Diary and Yomawari: Night Alone. From the director of The Firefly Diary, the game known otherwise as “Hotaru no Nikki”, Masayuki Furuya has returned with his latest project and spiritual successor to grace the PlayStation Vita and Steam: A Rose in the Twilight.

A Rose in the Twilight shares similarities with htoL#NiQ: The Firefly Diary in the game’s tone and eerie atmosphere. You awaken as Rose, a young girl in a desolate castle dungeon alone that is void of time and color. Affixed to her back is the Curse of Thorns that gives Rose a very grim and uncertain outlook to her grave situation. Searching for a way out, she meets the Giant, a large creature in the depths of the castle whom she revives. The Giant is blessed with enormous strength and becomes Rose’s ally as the creature is kind, gentle and bears a striking resemblance to a cinnamon bun. Nothing is known about Rose or the Giant as the two meet in strange and untimely circumstances. They both work together to escape the castle grounds and seek answers to the mysterious power of the thorns and the history behind the dark castle.

Rose possesses Thorn Power, the ability to absorb and transfer blood from one object to another. Objects that are colorless remain stationary until Rose interacts and uses her powers via blood to restore time. A red symbol is displayed to show the exact object receiving the blood transfusion. Through the manipulation of time, Rose utilizes an action and reaction effect to carefully move past treacherous puzzles and lurking death traps within the castle. In using her Thorn power ability, she also absorbs its essence by seeing a glimpse of castle events or the prior memories of a doomed occupant. As for the Giant, he can lift, carry and throw heavy objects to overcome obstacles and barriers and use his super strength to safely move Rose from Point A to Point B. His ability is limited to colored objects that Rose may or may not have interacted with. Colored objects are easy to spot as they are crimson and you guessed it, blood red in color. Rose and the Giant will encounter several gimmicks in the castle that either helps you to progress or deal a swift, punishing death. Trial and error is necessary as Rose is easily revived with “retries” or resuscitated at designated points.

Much of the challenge lies in the game’s numerous puzzles. Many of the stages are not difficult to solve but it’s the process to get past them that feels uninspiring and laborious. Rose, like her name suggests, is extremely fragile and delicate in her movements and even a tiny jump often causes her to fall face first to the ground. You may question initially if the jump was too high for Rose but repeated instances of her falling over puts that thought to rest. The Giant can toss Rose to high ledges and other places that would otherwise be inaccessible but navigating the two of them to work in tandem feels like a chore. The puzzles can be tricky if either of them are stuck or standing in the wrong position that forces you to start over from the last checkpoint. Transferring blood from an object sounds easy but can also be cumbersome as the game has a tendency to select other surrounding objects in the vicinity by default. Death is rampant with the “Live, Die and Repeat” game mantra as being struck by an object or enemy results in an instant ‘Game Over’ screen.

Visually, the game is stunningly beautiful as the castle is filled with deadly traps, items, lurking enemies, silhouettes, and crimson objects. In the absence of voice acting and conversational dialogue, the sense of fear and danger is heightened substantially. The interaction with objects is not air tight as there are minor glitches in the overall physics and animation. For example, I used the Giant to carry Rose before setting her down to temporarily pick up another object next to her. The end result was that she magically moved to appear on top of it bypassing a colorless mid-air obstacle entirely. It was serendipity but the ability to solve puzzles in more ways than one does lend itself to interesting encounters and creative solutions. The focus on using Rose’s Thorn to obtain Blood Memories creates a powerful aesthetic to pay full attention to everything with a crimson red color palette.

This review is based on a digital copy of A Rose in the Twilight on the PlayStation Vita provided by NIS America.