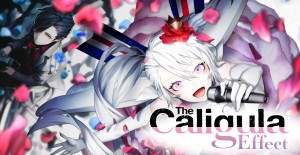 The world is not what it seems to be and nothing could be closer to the truth in The Caligula Effect. Developed by Aquria and penned by Persona series veteran, Tadashi Satomi, The Caligula Effect has finally made its way to the West on the PlayStation Vita in May 2017. At the heart of this JRPG is an superficially perfect world that is free of hardship and suffering but as the old saying goes: If it’s too good to be true, then it usually is.

The Caligula Effect is centered on the lives of high school students living in a virtual world called Mobius that is created by μ, a vocal synthesizer software program. Wishes are granted to all residents via creative song energy composed by a group named the Ostinato Musicians. Many people lose their grasp of reality as they experience the high school era on their lives indefinitely in a state of ignorance and bliss. If any resident becomes fixated or excessively reliant on μ in Mobius, they are corrupted and transformed into “Digiheads.”  Upon realizing the hard truth that they are living in a fantasy world, a group of students band together to form the Go-Home club to locate and confront the world’s misguided virtual idol μ. Along the way, they are assisted by Aria, a tiny and spunky virtuadoll created at the same time as μ, who assists the Go-Home club’s efforts to stop μ ‘s widespread influence in Mobius.

Battles are turn-based with an interesting twist on tactical gameplay via the Imaginary Chain system. By selecting a character’s actions, you are given a simulated illustration of how the attacks might play out with an estimated hit ratio percentage. This allows you to tailor your strategy by combining attacks and unleashing combos on enemies in your immediate surroundings. Be warned that the perfect strategy is not guaranteed and predicted scenarios may not come to pass due to enemy tactics and circumstances. Forming a skill chain is key to saving skill points and defeating more difficult enemies in tight quarters and areas. Two battles modes, beginner and normal, are available at the start to ease players into the game’s simple and intuitive battle system. Skills are divided into the following categories: Catharsis Effect, Battle & Affection and Passive Effect. Catharsis skills are attack skills unique to each character while Battle and Affection directly involve movement, stats, healing, guard and buffs. Passive effect skills influence and alter the battlefield parameters by being equipped on party members.

Stigmas are crystalized regrets that remain from lost souls that can be found throughout Mobius. There are three types: Manifestos, Core Beliefs and Traumatic Memory. Manifestos modify the offensive parameter, Core Beliefs the defensive parameter and Traumatic a variety of parameters. These stigmas are lot like the standard weapons, armor and accessories for different characters with rare stigmas boosting high attributes, skills or bonuses to give you the ultimate upper hand. In speaking to the numerous students on campus, each has an outward displayed percentage known as the Erosion Rate. The figure displays the student’s reliance on Mobius with respect to their lost individuality making those with high rates more hostile and aggressive. The color code also signifies the caution associated with them as blue symbolizes a low threat and red a higher danger level. This is similar to the risk value hovering over enemies during battle and if maxed out, your team members can activate triggered skills via a Risk Break. Using special abilities like Mifue’s Subpar Impact attack or Izuru’s Moonbeam skill can turn the tide of battle and deliver a swift and secure victory. 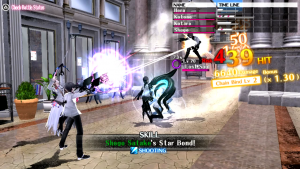 Relationships are cultivated with students in Mobius through a web of student connections found within the Causality Link. As you speak, listen and converse with many students on campus, you build rapport and relationships that changes them from strangers to acquaintances to friends. Rather than selecting students at random, some individuals will only trust you once you have befriended a friend of theirs in their close network of friends. Helping them with their troubles and concerns raises their affinity level and there are over 500 characters to explore in Mobius with unique personalities. Unveiled at the start of the game, these students escaped to Mobius with μ ‘s help to live a carefree and idyllic high school life. The Causality Link grants you access to student profiles where you can learn about their backstory and the trauma that they face on a more personal level. In strengthening your relationships with others and boosting their affinity levels, you can invite them to join your party to fight in battles. You can also acquire new skills as a reward for nurturing your relationships with other students. Advancing character episodes is achieved by increasing your affinity levels with other Go-Home members to give you a deeper understanding of their lives in the real world. Diving into the heart of a fellow Go-Home member reminded me similarly of the gameplay and story arcs found in the Ar Tonelico series.

The game feels refreshing as a JRPG title as there is so much to see and do that boosts the replay value significantly. The sheer number of NPCs you can recruit to your cause is enormous and the battles remain engaging even after hundreds of encounters. Many of the challenges ranging from the completion of trauma quests, collecting stigmas, checking WIRE for hints from your party members to honing the perfect strategy in battle is immensely gratifying. One major gripe I have is the camera angles that have a tendency to obstruct battles in tight spaces. Thankfully, this can be corrected by manually adjusting the camera but it proves to be an inconvenience on several occasions. Where the game shines is its musical score with catchy tunes and songs by celebrated Japanese artists like OSTER project, 40mP, 164 and cosMo@Bousou-P and many more. You can definitely see the psychological themes and issues that permeate the game from the Persona series veteran, Tadashi Satome who has infused The Caligula Effect with a Persona flavor. 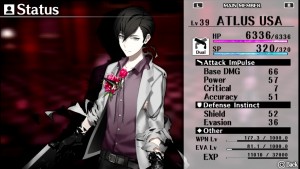 The Caligula Effect manages to take a conventional story of students trapped in another world and make it inspirational as it tackles personal and controversial issues that many people can relate to. Where other similar titles have tried and failed, the blend of the game’s dialogue, battle system, various secrets, party recruitment and relationship management makes this JRPG feel truly exceptional. Though it may not share the same popularity as Persona 5, it is one of the best titles from developer Aquria to grace the PlayStation Vita. Those hungry for a unique and impactful JRPG on the PlayStation Vita need only look to Tadashi Satome’s latest title, The Caligula Effect for a captivating experience.

This review is based on a digital review of The Caligula Effect on the PlayStation Vita provided by Atlus.