Child of Light is a modern role playing game originally developed by Ubisoft Montreal that was released on the PC, Xbox 360, Xbox One, PS3, PS4 and Wii U in April 2014. Powered by UbiArt Framework, the same engine used in the popular Rayman series, Child of Light was also released on the PlayStation Vita in July 2014 and received very positive reviews from critics and the gaming community. The game offers a wonderfully deep experience that many may not initially expect to find at first glance.

The story begins with Aurora, the daughter of a duke, in Austria during the 1890s. On the eve of Easter, Aurora suddenly falls ill and appears to have died in her sleep, causing the Duke to be bedridden and overwhelmed with sorrow and grief. She awakens atop an altar in the lost continent of Lemuria and wanders into the company of Igniculus, a bubbly blue firefly. After a brief introduction, Igniculus leads Aurora to free the imprisoned Lady of the Forest to enlist her aid to return home. Eager to escape her predicament, Aurora is tasked to recover the light of Lemuria that was stolen by the Dark Queen Umbra and is granted the ability of flight. A wondrous journey begins as she recruits allies along the way: Rubella, a lonely jester, Finn, a cowardly Capilli, Robert, a Populi trader, Tristis, Rubella’s brother and Norah, Aurora’s stepsister. Other allies join Aurora further on her quest as all is not what it seems in Lemuria with plot twists and loyalties tested. The dialogue and interaction is poetic, intellectual and elegant with rhymes, metaphorical references and humor thrown in for good measure. 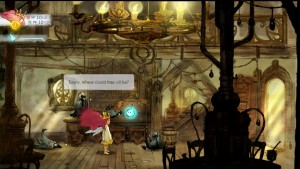 At its core, Child of Light is a side scrolling game with RPG elements. Aurora can run on the ground or fly upwards to push boxes, open chests, pull levers or engage wandering enemies in the open world. Unlike the conventional RPGs, you are limited to two party members with the option of switching characters in battle at any given time. The system draws inspiration from the active time battle system seen in games like the Grandia and Final Fantasy series. An interesting highlight of battle is using Igniculus to slow the enemy’s turn or gather light to restore health and magic to your party members from the surrounding vegetation. The capabilities of the blue firefly are limited to its light meter and should be used strategically and sparingly. You can assign experience points to each party member by following one of the skill trees available with the added benefit of most skills visible to help you make an informed decision. Oculi, otherwise known as colorful gems, can be equipped to bestow special abilities and enhancements. You can craft special oculi by combining oculi from any of the four types: Rough, Tumbled, Faceted and Brilliant. The oculi found in game includes: Sapphire, Ruby, Emerald, Amethyst, Tourmaline, Citrine, Diamond, Onyx and Spinel. 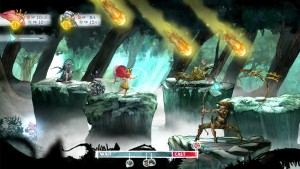 There are plenty of areas to explore as you navigate Aurora across the land through mystical places often filled with surprises and dark, treacherous areas. Thankfully, you can control Igniculus with the analog stick to collect light and heal Aurora in the midst of deadly traps and puzzles. He is necessary to unlocking certain items that are out of Aurora’s reach in her travels especially in narrow corridors. The little blue firefly initially serves as her sole companion in offering perspective, rhetoric and rhyming responses. You will also encounter flying poetic letters, known as Confessions that are spread throughout the land that are visibly caught in a windy updraft.

Visually, the game is a work of art and easy on the eyes. The sheer amount of detail found in its fantasy-inspired towns, vistas and landscapes is breathtaking with a phenomenal soundtrack by the Canadian songwriter, Coeur de Pirate. Fitting in the realm of the game is the music’s sense of wonder and youthfulness that is wonderfully conveyed through the piano scores. The adventures, flight and the exploration is captured effectively as Child of Light conjures emotions of nostalgia, energy and intimacy with the world of Lemuria. You are in for an audible treat as the boss fight music was performed using a live orchestra with credit given to audio designer, Hugo Bastien, for the game’s sound effects. 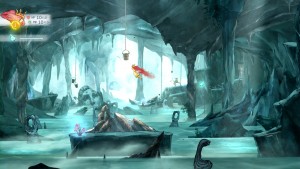 Child of Light boasts an intuitive battle system, stunning visuals and a modest story that truly feels like a breath of fresh air. As a modern title, it’s a touching and beautiful tribute to the JRPG genre with the overall atmosphere, cast of characters and poetic dialogue. Games like these don’t come along often with compelling artistry, intellectual narrative and imaginative worlds. Child of Light is a captivating game and RPG fans should not hesitate to buy this masterpiece right away. 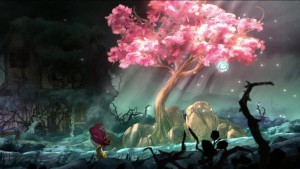 This review is based on a purchased copy of Child of Light on the PlayStation 4.