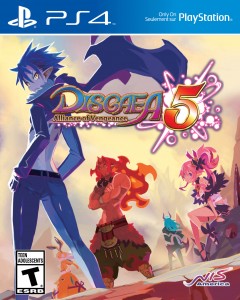 The Disgaea series originally debuted in 2003 that has been immensely popular worldwide as a franchise built on storytelling, strategic gameplay and whimsical humor. As the series enjoyed several spinoffs as well as three PS3 games: Disgaea 3, Disgaea D2 and Disgaea 4, fans have anxiously awaited news of the next Disgaea title. Nippon Ichi is back with their latest and first Disgaea title to grace the PlayStation 4 console: Disgaea 5: Alliance of Vengeance.

The Netherworlds have been oppressed and devastated as the demon emperor Void Dark spreads evil across the lands with a monstrous army of 10 billion soldiers known as the Lost. With countless lives taken in cold blood by his malicious rule, the Overlords of the Netherworlds have formed an unlikely alliance to fight back against Void Dark’s tyranny and exact vengeance. The protagonist Killia is accompanied by allies like Seraphina, Usalia, Red Magnus, Christo and Zeroken. Each character has their own unique personality that keeps things interesting as events unfold and battles erupt endlessly. 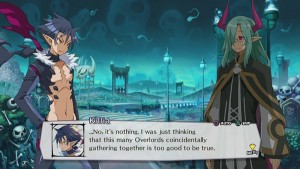 Gameplay is comprised of the standard grid-based gameplay you strategically destroy your enemies on the battlefield map. The flow of the game moves from an event cutscene to your home base where you can prepare your soldiers prior to battles. Organizing and equipping your units with the best equipment, weapons and armor is vital to getting the upper hand against your foes. Allied units are recruited at a recruiting facility in the base with more than 40 different jobs and races available at your disposal. Special stats and potential abilities can be strengthened and unleashed in a board game type of world known as the Chara World. It can be travelled and explored to obtain special rewards in your bid to create the ultimate ally unit. Items acquired throughout the game may contain hidden powers embedded within the Item World filled with notorious inhabitants. Defeating these enemies will grant you special bonuses that may strengthen an item’s performance past its limit. The Dark Assembly is a place where you can strengthen the equipment of your units by suggesting bills that must be approved by the Dark Assembly senators. Should the proposal fail, you may opt to bribe the Senators with items or use brute force to persuade them to reconsider your proposal. 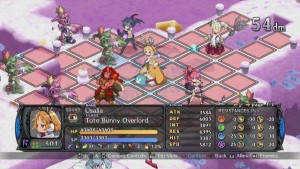 The Revenge Gauge is a new addition that gradually fills when allied units are defeated or take damage on the battlefield. When completely full, it allows them to activate Revenge Mode with a significant boost to various character stats. This is tied directly to the Overload secret skill unleashed during Revenge Mode and applies to demon Overlords or Overlords who possess extraordinary powers. Special moves or ultimate attacks are available at your disposal to turn the tide of battle for the duration of the Revenge Mode in combat. The Squad system allows you to strategically organize your allied units into squads such as Foot Soldier Squad, Flatty Squad or Boot Camp Squad at home base. Each respective squad has unique strengths and skills that are useful in battle and comes in handy when capturing and interrogating rival squad members that are prisoners of war. Dual Magichange occurs when two Magichange weapons are equipped and used together to form destructive giant weapons to wreak havoc on your foes. The appearance, shape and effects of the weapon change depending on the combination of weapons by party members. 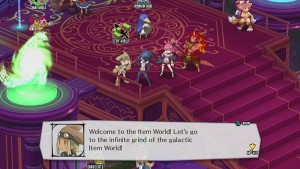 The highlight of the newest features is the Nether Research Squad for which you can gather and form a research squad sent to other Netherworlds to acquire items. Travelling via an expedition ship, you can opt to explore and investigate a new Netherworld to obtain rare rewards that may lead up to fighting the Netherworld Overlord. It is possible to capture prisoners from the Netherworlds as your research squad excavates and examines the unknown Netherworlds. Back at the home base, the Quest Shop enables you to accept quests from Netherworld inhabitants to earn special exclusive rewards like unlocking special classes or obtaining secret scrolls. The scrolls allow you to learn unique skills and you may encounter mystery allies or enemies along the way as a perk. Powerful units and challenges from other Netherworld Overlords are more prevalent as you clear quests and successfully build your track record.

Many improvements have been made in the game compared to previous Disgaea titles such as new character classes like the maids, dark knights, fairies and wrestlers with classes like the soldier, magician, priest and priestesses and archers making a return. The number of playable characters on screen has been expanded to 100 allied units compared to the previous number of 10 units in earlier Disgaea games. Leveling up characters is no longer a baffling ordeal as your character classes can now be upgraded automatically without the need to create a new character. Displaying the affliction and resistance stats is another welcome change that makes it easier to monitor the status of your party members on the battlefield. The animations and special effects are polished and very detailed giving the game a vibrant and colorful style that is true to the Disgaea universe. Menu screens have been reworked and streamlined that are intuitive and easy to use with its fair share of colored palettes. The soundtrack composed by Tenpei Sato is whimsical, inspiring, catchy and the perfect addition to the latest Disgaea instalment. 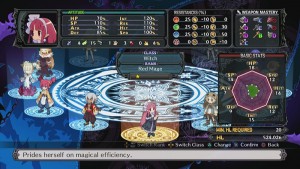 Disgaea 5: Alliance of Vengeance is the most refined Disgaea game to date in the series. With deep gameplay mechanics, a comical cast of characters and rich customization, this game is the Disgaea overhaul that fans have been waiting for. The redesigned leveling system, new character classes and the inclusion of the Revenge Mode, Item World and Nether Research Squad makes this a highly enjoyable and addictive game. Disgaea fans will find plenty to love about Disgaea 5: Alliance of Vengeance as one of the best strategy role-playing games available on the market. 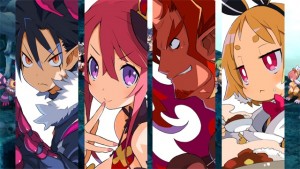 This review is based on a purchased digital copy of Disgaea 5: Alliance of Vengeance on the PlayStation 4.